The timetable for Masses and ceremonies during Holy Week can be read here. 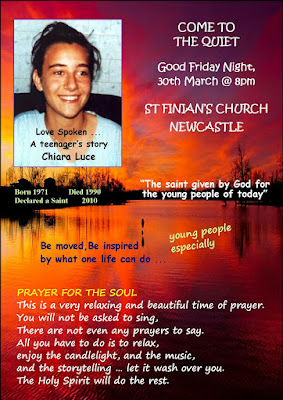 Email ThisBlogThis!Share to TwitterShare to FacebookShare to Pinterest
Labels: Seasons

The photo above is of the meeting between St Patrick and King Laoghaire in the royal court of Tara (Teamair). The saint is preaching the Gospel to the king and his courtiers, holding up the shamrock, symbol of the Trinity, in his right hand.  This is the scene as depicted in a stained-glass window to be found in Sts Peter and Paul's church, Athlone, designed by Richard King of the Harry Clarke Studios which continued Clarke's work after his death in 1931. The photo is reproduced here by kind permission of the authors of the website Roaringwater Journal.

For more reading on Harry Clarke, see here and, for his illustrations for Ireland's Memorial Records 1914-1918 (published in eight volumes, 1919) giving information on 49,435 men killed in WWI, see here.  Vol 5 (K-McG) has been digitized by TCD and may be browsed  here. If you scroll down to the name McCann, Joseph William (p.282), you will find the following record for one of our parishioners,

Let us then remember on St Patrick's day all Irish people at home and abroad, both living and dead -- and that includes this young parishioner the Harry Clarke window has led us to. Joseph McCann lies far away today in the Portianos Military Cemetery on the Aegean island of Lemnos (see here  Note that in this Commonwealth War Graves Commission record his address is given as Keating's Park, Rathcoole).

Email ThisBlogThis!Share to TwitterShare to FacebookShare to Pinterest
Labels: Seasons

When people are unable to attend Mass it is recommended that they view or listen to the Mass on-line, on television or radio or that they spend a time in prayer as individuals or as a family.

Where serious conditions of access or safety arise regarding a Church building, the Parish Priest or Rector may decide that a Church may remain closed even on Sunday.

Due to the state of the roads and areas around our Churches we are cancelling all Masses in Saggart, Rathcoole, and Brittas this weekend. Mass in Newcastle will go ahead (i.e. Saturday Vigil, 7 p.m. and Sunday, 10.30 a.m.). The diocese supports this decision in the interests of health and safety (see above communication). We hope you are all keeping warm and have enough food.  Please keep in contact with those who are housebound to see they are okay.

See newsletter of 11th March here (p.4) for photos of our churches in the Big Snow.
Posted by Parish Web Sec at 16:20 No comments:

Fáilte and Welcome, visitors to this site for the united parishes of Saggart / Rathcoole / Brittas and Newcastle Lyons in west County Dublin. The site is for the benefit of parishioners first of all and then for anyone who may drop in from elsewhere. 'Rath Dé' on your work as we pray for it on ours.

To contact anyone on the parish team, see the heading on the top menu-bar. The Parish Secretary takes calls at 086 0108420 Monday to Thursday, 10 am to 1 pm, and is in the office on Thursday at these times. Parish Office email: saggartparish@gmail.com. The newsletter will resume publication shortly. Email donal.mcmahon@eircom.net any suggestions or contributions for this website.
See also on Facebook
CALENDAR