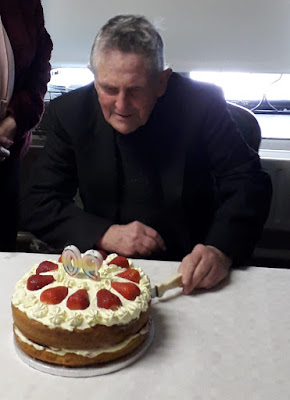 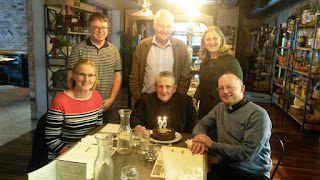 Fr Michael McGowan, our esteemed and cherished Parish Chaplain, celebrated a real milestone of a birthday recently, his 90th. We congratulate him and, at the same time, thank him for all he has done in the many parishes he has served in. Here are some glimpses into that long, dedicated life: the early years in Mohill, his training in Maynooth (the photo below is from the Maynooth Calendar 1953-54, A. being for 'acolyte') and his ten years in Ballymore Eustace for which tribute was paid him in 2002. 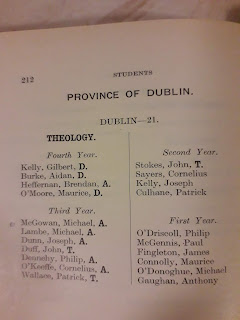 Fr Michael's elder brother Myles (b.1920) became a priest too. Having trained in St Patrick's College, Carlow, he was ordained in 1945 (ten years before Fr Michael's ordination) and served in the archdiocese of St Paul and Minneapolis. He died in 2008 at the age of 88. Fr Michael talks about him in this American newspaper tribute.
Posted by Parish Web Sec at 18:50 No comments:

Email ThisBlogThis!Share to TwitterShare to FacebookShare to Pinterest
Labels: News and Events, Priests

I thought I heard in my mind the voice of those who were beside the wood of Foclut, near the western sea, calling out “We beg you, holy boy, to come and walk again among us” . This touched my heart deeply. (Confession, Par. 23)

Rogamus te (abbreviated to RGMS TE in photo, top left - click on photo to enlarge it) sancte puer ut venias et adhuc ambules inter nos. To read this sentence in the original manuscript now in TCD and dating all the way back to c.807, click here.  Use button top left to get full-screen view, and then use zoom in/out buttons as desired. Our sentence is at lines 23-4, second column.  How wonderful to be able to see this early Irish manuscript up close on your very own desktop, laptop or even smartphone!

In the panel the 'wood of Foclut' is represented by the branch in the top-left corner. Children, what has the child (bottom left) in his hand and who is he stretching it out to?  The panels are the work of Ken Thompson who also did the statue of St Patrick the Pilgrim in Lough Derg.
Posted by Parish Web Sec at 15:59 No comments:

Email ThisBlogThis!Share to TwitterShare to FacebookShare to Pinterest
Labels: Saints

For Some Lenten Reflection

Sunday next is the first Sunday of Lent. We have entered into the annual 40-day period of preparation leading to the great feast of Easter which falls this year on Sunday 21st April. When the writer was in school long ago, the emphasis was on what one ought not to do during that period, e.g. eat chocolate until the big break-out with the Easter egg on Easter Sunday. The emphasis today is less on denying oneself certain things than on doing things for others, e.g. the Trócaire Lenten campaign which asks us to do what we can for the poor. The purpose of the practices of 'fast and abstinence' of old was, of course, to bring people to reflect on the fundamentals of life, fundamental in the sense of talking about life's great questions -- why we're here, what we should do while we're here, and where we're destined to go in the end. Pausing for thought or reflection like this is in itself a deep and religious thing; it can come about at expected moments and from expected sources or at and from unexpected ones.  The first kind come from, say, the Pope or (Arch)bishop, while the second are those which, shall we say, cross one's path -- you find them rather than they, so to speak, seeking you out.

Two texts in the 'expected' category are Pope Francis's 'Message for Lent 2019' as well as sermon for Ash Wednesday here, and Archbishop Martin's reflection on Lent focusing on the sacrament of Baptism. A text in the 'unexpected' category is a poem by the 17th century Anglican clergyman Robert Herrick which this writer has long known about but not read closely for some considerable time. The subject of Lent has made him look it up again.  'It is a fast to dole / Thy sheaf of wheat / And meat / Unto the hungry soul.'

See, again, this week's newsletter for more good advice from Pope Francis.  He recommends fasting from things like grudges and bitterness and (I like this) : Fast from worries and have trust in God.

Whatever sources it springs from, may the reflection they awaken in you be for your inner enrichment over the season of Lent and beyond.

Fáilte and Welcome, visitors to this site for the united parishes of Saggart / Rathcoole / Brittas and Newcastle Lyons in west County Dublin. The site is for the benefit of parishioners first of all and then for anyone who may drop in from elsewhere. 'Rath Dé' on your work as we pray for it on ours.

To contact anyone on the parish team, see the heading on the top menu-bar. The Parish Secretary takes calls at 086 0108420 Monday to Thursday, 10 am to 1 pm, and is in the office on Thursday at these times. Parish Office email: saggartparish@gmail.com. The newsletter will resume publication shortly. Email donal.mcmahon@eircom.net any suggestions or contributions for this website.
See also on Facebook
CALENDAR